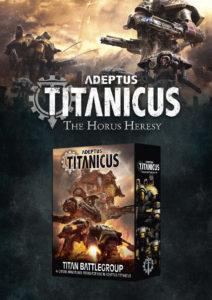 In conventional battles, the presence of a lone Titan – even a Scout class such as a Warhound – can be sufficient to guarantee victory. However, when Titans go to war en masse, they are formed into groups, each operating under the command of their most senior Princeps for the duration of a campaign.

Assemble a powerful battlegroup of Titans and dominate your opponents in games of Adeptus Titanicus with this set of 4 Titans – a Warlord Battle Titan with Volcano Cannon, a Reaver Battle Titan and 2 Warhound Scout Titans. These can be fielded as an Axiom Battle Maniple, leveraging the Might of the Omnissiah to push through the din of war and issue commands despite adverse conditions.