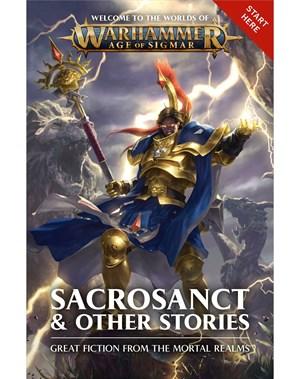 Within this book you will find Sacrosanct, a fantastic new novella from C L Werner…

A restless menace threatens the town of Wyrmditt. Stirred from his grave by fell magic, Sabrodt, the Shrouded King, seeks dominion over the kingdom he failed to claim in life. So great is the terror inflicted upon the lands by Sabrodt and his nighthaunts that Sigmar, God-King, sends a retinue of his warriors most skilled in the art of Azyrite magic to liberate the town. The Stormcast Eternals of the Sacrosanct Chamber are warrior-wizards, imbued with arcane knowledge and the power to wield the energies of the storm in battle. Leading the retinue is Knight-Incantor Arnhault, a formidable mage who has studied the histories of Sabrodt's kingdom. But the fight against the Shrouded King will challenge Arnhault's mettle like none other – especially when he discovers that the Undead knows more about his past than he does.

Also within this book is a host of awesome short stories giving you a flavour of the many warring armies that exist with the worlds of Warhammer Age of Sigmar.

CONTENTS
The Dance of the Skulls by David Annandale
Great Red by David Guymer
The Sands of Grief & The Volturung Road by Guy Haley
Callis & Toll: The Old Ways by Nick Horth
A Dirge of Dust and Steel, Auction of Blood & The Prisoner of the Black Sun by Josh Reynolds
Wrathspring by Andy Clark
Sacrosanct, Shiprats & The Witch Takers by C L Werner
Plus an extract from Blacktalon: First Mark by Andy Clark