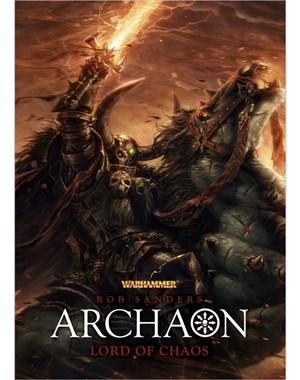 Book 2 of the Archaon duology

One a devout Sigmarite templar, the warrior now known as Archaon has fallen fully into the grip of Chaos. As his quest for the artefacts of the Everchosen intensifies, dark forces surround him, some seeking to aid him, some to seize his destiny for themselves…

READ IT BECAUSE
This is where Archaon truly becomes the ultimate Warhammer villain. As he faces the darkness within himself and the forces that seek to shape his destiny, Archaon's struggle provides as compelling a portrait of a Chaos champion as has ever been written.

THE STORY
Archaon – the former templar of Sigmar now dedicated to the Ruinous Powers – continues his quest to claim the six great treasures of Chaos and bring death to the world as the Everchosen of the gods. As he travels the world, from the southern Chaos Wastes to the verdant lands of Bretonnia, Archaon faces unimaginable perils and devastating betrayals. And all the while, Be'lakor, the first daemon prince, plots and awaits his chance to destroy the would-be Everchosen and claim his mantle as Lord of Chaos and harbinger of the End Times.