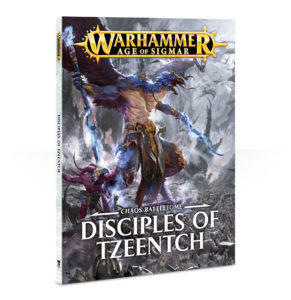 The Changer of Ways, the Master of Fortune, the Great Conspirator and the Architect of Fate – these are just some of the names of Tzeentch. A brother god to Nurgle, Khorne and Slaanesh, and often an ally of the Horned Rat, he is the undisputed master of the arcane arts. His followers, daemon and mortal alike, swarm over the mortal realms in scintillating glory, searing the land with coruscating flames of change. Tzaangor tribes raid ancient places of knowledge while mortal cultists work in secret to advance their god’s unknowable goals. Tzeentch’s plans are manifold, and he revels in watching each unravel.

- Forces of the Disciples of Tzeentch: rules and abilities for your Tzeentchian army, including the Master of Destiny Battle Trait – manipulate fate itself (well, your dice)!
- 2 unique Spell Lores, the Lore of Change and the Lore of Fate;
- Command Traits for Daemonic, Arcanite and Mortal followers of Tzeentch;
- Artifacts of Power for Arcanite and Mortal followers;
- Daemonic Gifts for Daemonic followers;
- 16 Warscroll Battalions, and Warscrolls for the full Daemon and Arcanite range of Tzeentch miniatures;
- Allegiance Abilities, which can be used with Slaves to Darkness bearing the Mark of Tzeentch;
- Path to Glory rules, 2 Battleplans, Matched Play points value tables and Pitched Battle profiles.