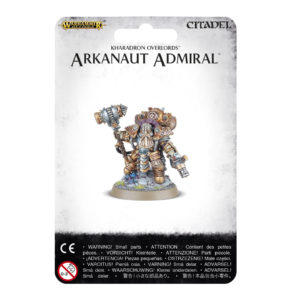 An Arkanaut Admiral is the leader of an airfleet. An Admiral does not have a ship of his own, as each ship has a Captain at the wheel, but will nominate one craft as his flagship. It takes success and tremendous profit for a duardin to catapult themselves into the upper echelons of the airfleets, and individuals that have done so are battle-scarred veterans that have seen countless wars, boarding actions and aerial bombardments.

This multi-part plastic kit contains the components necessary to assemble an Arkanaut Admiral. He leads Kharadron Overlords armies into battle by example, charging into the fray wielding a huge skalfhammer and volley pistol. His knowledge of the Kharadron Code is second to none, which proves a great advantage in a fight. His ornate armour is covered in pipes, valves and gadgets years of service have meant many augmentations to make combat and leadership easier. The miniature stands atop a molten heap of industrial waste, adding detail to his base.

This model comes as 12 components, and is supplied with a Citadel 32mm Round base.