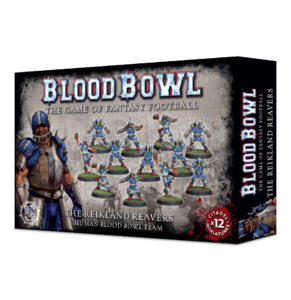 Known during their first few seasons as the Altdorf Acolytes, the team who became the Reikland Reavers quickly established a reputation for their great skill and ability on the pitch. Some judicious transfer decisions, helped by the impressively deep pockets of original owner DD Griswell Snr., has seen the team rise to the top during their long life. Now, with DDs great-grandson JJ Griswell Jr. at the helm, the Reikland Reavers are probably the finest all-round team in the world.

This multi-part plastic kit contains the components necessary to assemble the Reikland Reavers, a Human team for use in games of Blood Bowl. It contains:

as well as 6 balls, a double-sided score coin and a decal sheet. Supplied with 12 32mm Blood Bowl round bases, featuring holes to slot the ball into when your miniature has possession.