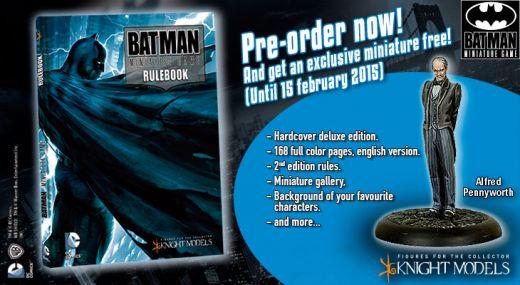 The Streets of Old Gotham are over-run. Dr Hugo Strange has expanded the now abandoned Arkham Asylum site to encompass a large chunk of the city. With criminal gangs running amok on the streets, chaos and violence reign.

The Joker, Two Face and Penguin plot and scheme to gain control of this regions and the hundreds of people trapped inside. Political figures and reporters who speak out against Hugo Strange find themselves waking up in with the inmates and must fend for themselves. Only one man stands against this madness... The Dark Knight.

Play as Batman or his colourful enemies in this skirmish game by Knight Models. Will your gang be able to fight off the rivals and claim more territory, or will Batman break up your best laid plans. Based upon the best selling Comics, Movie and Videogame, with exquisite miniatures sculpted by Knight Models.

This rulebook contains 168 full colour pages in English of all the current second edition game rules, miniatures gallery, background & history of all your favourite heroes and villains from this amazing DC universe and this fantastic tabletop game in a hardback deluxe book.

Also if you Pre-Order this amazing product before 15/02/2015 you will also receive an exclusive one off miniature of Alfred Pennyworth. Bruce Wayne\'s trusted butler and friend, a healer in the game. This model will never be available again"