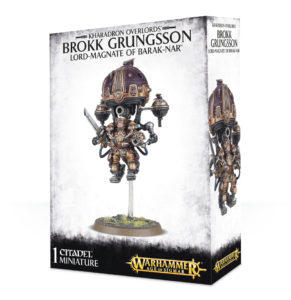 Brokk Grungsson exemplifies the self-made Kharadron Overlord privateer. He is rapacious in the hunt for aether-gold, and daring in his explorations of the skybound wonders of Chamon. Brokk Grungsson is the only Admiral that has successfully led a fleet around the Spire, the fabled Horn of Chamon. Some Kharadron would be satisfied having achieved such honours, but Brokk Grungsson strives on, hungry for ever-more success and recognition his natural aeronautical abilities and aggressive nature mean these successes are rarely far from his grasp.

This multi-part plastic kit contains the components necessary to assemble Brokk Grungsson, Lord-Magnate of Barak-Nar. Borne aloft in an elaborate, custom-made dirigible suit, hes armed with a sizable cannon known as Grungssons Boast, a multi-barrelled gun called the Magnates Charter and an aethermatic saw for close combat. He also features aetherblasters mounted in his impressive moustache; such is the opulence his status brings!

The suit itself is covered in the kind of pipes, valves, cogs and latticework youd expect for a duardin able to pay for the finest things in war, even including a custom filtration system and powered assistance for his limbs. Brokk Grungsson is a powerful duardin, and before his enemies die, he wants them to know it...

This model comprises 46 components, and is supplied with a Citadel 50mm Round base, with a 35mm ball and socket flying stem.