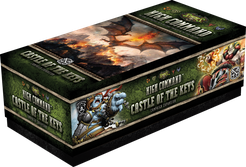 The Castle of the Keys has been a center of power since ancient times and then served as a lair for Pyromalfic, a dragon of immeasurable power. Multiple armies converged on the castle to wage a war of mutual obliteration, forcing Pyromalfic to the surface for his cataclysmic last stand. This battle shook the foundations of western Immoren. Will you endure it or be destroyed?

Customize your deck with powerful new cards and take command of the pivotal events of this historic war in the Castle of the Keys campaign expansion. Recreate one of the wars that changed the face of the Iron Kingdoms, and rewrite history!