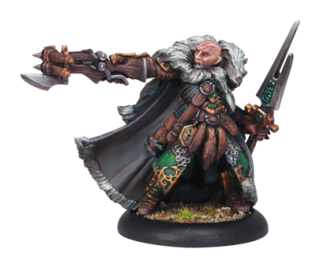 Alone or leading a group of reeves, the reeve hunter is a stealthy predator who uses the forest and his own mastery of woodlore to remain unseen. When the reeve hunter chooses to attack, it is usually with a volley of well-placed bolts, unleashed in a split second from his double crossbow. However, the reeve hunter is also armed with a deadly cleft sword, which he uses simultaneously with his crossbow, cutting down one enemy in melee and feathering another before his initial target hits the ground.