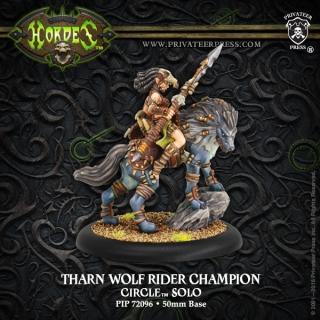 The Tharn Wolf Rider Champion is a new solo for Circle Orboros featured in HORDES: Primal.

Released the 21st of December.

Scarred and battered veterans, wolf rider champions are the embodiment of the speed, agility, and ruthlessness for which their kind are known. Each has survived countless battles and has built a reputation one perfect kill at a time. Champions subdue only the most willful and physically imposing dusk wolves as mounts, regarding the training of such beasts as a challenge and desiring a hunting partner with strong predatory instincts to match their own.