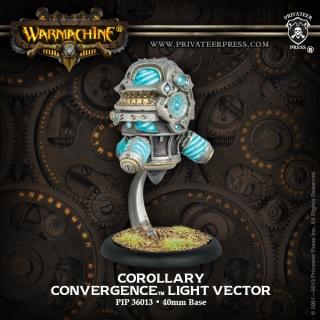 Unlike other vectors, whose primary function is to apply destructive force, the Corollary is designed to support its warcaster and allied forces in more complex ways. Its internal compartments house a suite of arcane accumulators that store the residual energies generated by a warcaster and his battlegroup in combat. These energies are captured by irises recessed in the Corollary’s hull and then dispensed at the warcaster’s command to empower other vectors, making the warcaster exponentially more efficient.