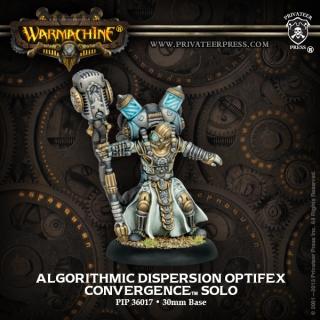 Among the most important but demanding tasks carried out by the living priests of the Convergence is the deployment of algorithmic dispersion arrays—devices that increase the reach of a warcaster’s arcane spells well beyond normal tolerances. By carefully modulating the dispersion array’s frequencies, the optifex acts as a transmitter through which the warcaster can bolster his battlegroup or strike down enemy targets.