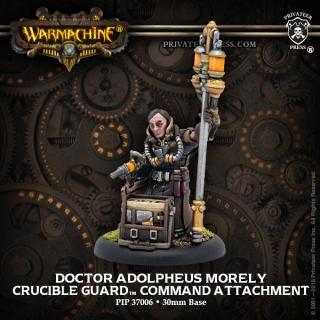 Doctor Adolpheus Morley is an alchemist obsessed with his work, foregoing all comforts in his latest efforts to unlock new discoveries. Morley, who supports the Guard as head of its surgical division, has become obsessed with the effect of alchemical concoctions on the body, human or otherwise. Soldiers given to his care receive treatment with wary apprehension, as the man has a reputation as a dangerous lunatic. He views the battlefield as the ideal test bed for his latest creations, exposing his troops to all manner of combat stimulants without restriction. That a significant number of his mercenaries who survive the fighting subsequently expire does not deter the doctor in the slightest.