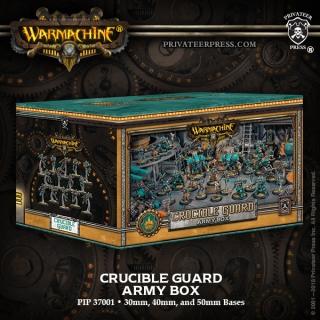 WAR IS A CRUCIBLE!

The sizzle of acid eating through armor, the roar of pyrophoric ammunition burning a target alive, and the hiss of gas venting from grenades, jet packs, and rocket shells—these are the sounds that accompany the Crucible Guard in battle. This army of alchemist-soldiers represents the most scientifically advanced military to hit the battlefields in the modern age. After their former headquarters was seized by hostile forces, the Guard reformed under the direction of a new patron and a cadre of radical leaders who advocate a more aggressive agenda. Emerging from smoke-filled laboratories and workshops, their faces veiled by gas masks and their bodies protected by advanced gear, they stand ready to use whatever force is required to reclaim what they lost and to secure their rightful place among the great powers of the Iron Kingdoms.

Take command of the alchemical might of the Crucible Guard with this box, which contains a full army including elite rocketmen and combat alchemists along with a battlegroup of warjacks led by the warcaster Aurum Adeptus Syvestro.

*Note: unlike the multi-kits, this box includes only the parts for assembling the Vindicator and the Suppressor