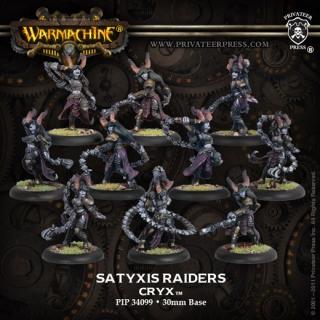 Striking without warning, the savage and cruel Satyxis are the terror of the Broken Coast. Belonging to an ancient tradition in which sailing is as natural as breathing, these fierce warrior women believe nothing in life to be sweeter than plunder and slaughter. The Satyxis savage their victims with the tearing barbs of their enchanted lacerators or break their bones with smashing blows of their twisted horns.

SPECIAL NOTE: PIP 34099 contains the same Mk II stat card as PIP 34032. The models in PIP 34099 are the same models as are in PIP 34032 and 34033 and replace those older PIPs by offering their contents in a complete unit. The replaced PIPs will no longer be available from Privateer Press beginning November 1st, 2011.