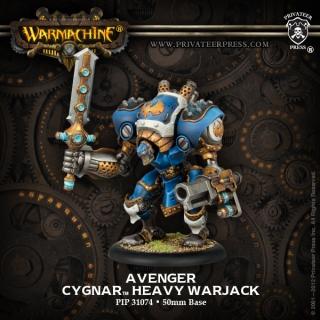 Caspian engineers developed the hulking Centurion to rival the size and strength of Khador’s warjacks. Its increased armor and heavy shield makes it one of Cygnar’s most durable designs, and its mighty piston spear can easily pierce the hulls of enemy warjacks. The Hammersmith swaps out shield and spear with massive twin forge hammers meant to flatten anything in its path, while the Avenger features a stun blade and a groundbreaking seismic cannon. Representing a step forward in Cygnaran technology, the seismic cannon fires sophisticated projectiles that can unleash a localized earthquake upon impact.

SPECIAL NOTE: This box contains all the parts necessary to assemble one of three heavy warjack variants