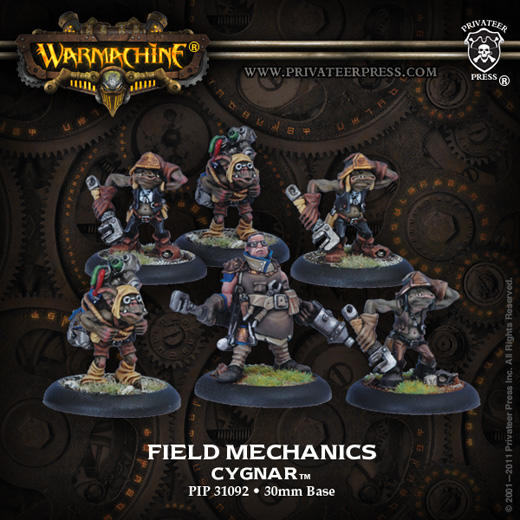 Needs Generating RRP: £14.95
New as supplied by Privateer PressOn the battlefield, armor gets mangled, weapons misfire, and warjacks
break down. When that happens, Cygnar???s highly skilled field mechaniks
and their gobber assistants brave the front lines to make crucial
repairs under fire. Each mechanik can perform nigh-miraculous repairs on
damaged warjacks, keeping Cygnar???s greatest weapons in the fight.
The Field Mechanik unit comes in a blister (PIP 31092). A player may
field up to three Field Mechanik units for each warcaster in a Cygnar
army.
SPECIAL NOTE:
PIP 31092 contains the same Mk II stat card as PIP 31002. The models in
PIP 31092 are the same models as are in PIP 31002 and PIP 31003 and
replace those older PIPs by offering their contents in a complete unit.
PIP 31002 and PIP 31003 will no longer be available from Privateer Press
beginning May 1, 2011.