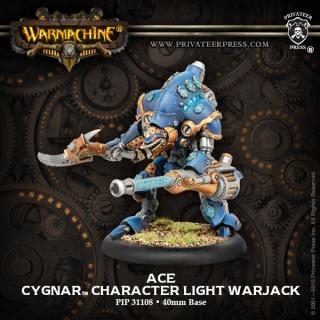 Designed in secret by the Cygnaran Armory to carry out covert operations for the Cygnaran Reconnaissance Service, Ace was built as a one-of-a-kind prototype. The machine integrated an experimental mechanikal device intended to camouflage the warjack, rendering it almost invisible in the field. Though the original chassis of the ’jack was destroyed during an operation in Llael in 596 AR, Allister Caine was able to recover Ace’s cortex. Since the warjack’s reconstruction, Caine has relied on it during a number of CRS missions requiring an abundance of both discretion and firepower.