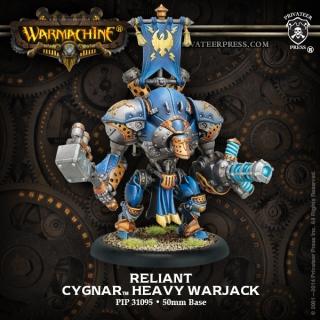 By taking the impressive bulk and chassis of the Ironclad and adding powerful voltaic weaponry, the Stormclad and Reliant were born. The Stormclad is equipped with an accumulator that draws on the galvanic energies of nearby Stormblades to augment its impressive storm-powered generator blade. The Reliant is built for versatility, whether enveloping the enemy with crackling electrical fields from a distance using its Stormbringer or driving the opposition to its knees with pulse hammer strikes.

SPECIAL NOTE: PIP 31095 contains the same Mk II stat card as PIP 31022 as well as one completely new stat card for the Reliant. The model in this box represents the same figure as PIP 31022 in the game. However, the model in PIP 31095 is a new sculpt and therefore looks different from the model found in PIP 31022. In addition, this model is plastic rather than metal. The replaced model will no longer be available from Privateer Press beginning August 1, 2015.