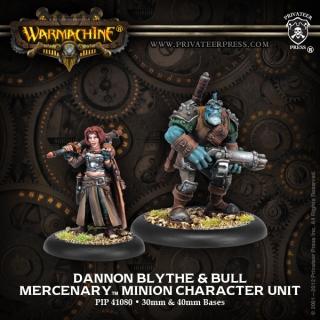 Dannon Blythe & BullThe bounty hunter team of Dannon Blythe and the trollkin known simply as â??Bullâ?? has gained infamy across the war-torn region for their ruthless determination and efficiency. Wielding an impressive arsenal, they often take the expedient route of delivering targets deadâ??allowing them to complete twice as many jobs while avoiding the tedious hassle of handling live prisoners.Dannon Blythe and Bull come in a blister (PIP 41080).