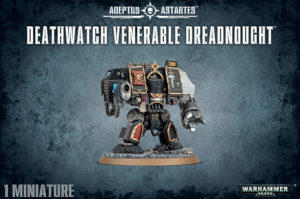 Always on the hunt for the largest and strongest xenos to eliminate, the Venerable Dreadnoughts of the Deathwatch are highly respected as killing machines by their Watch Masters. Filled with ancient wisdom and ancient hatred, they are often consulted before a Kill Team is sent into battle, that their knowledge may optimise the fight ahead. Once the battle commences, the Venerable Dreadnought is a living icon of the Chapter who sent them, the spearhead of the assault. Any alien in their path can expect a swift demise.

This multi-part plastic kit contains all the components necessary to assemble one Deathwatch Venerable Dreadnought. In it, youll find a Space Marines Venerable Dreadnought, plus a Deathwatch Upgrade Frame this contains 10 Space Marine shoulder pads and 2 Terminator Armour shoulder pads with Deathwatch insignia, a Sergeant chest plate, 2 variant helmets, a power sword, a small backpack icon and 2 large vehicle icons, meaning youll have plenty of spare bits with which to assemble your perfect Kill Team!