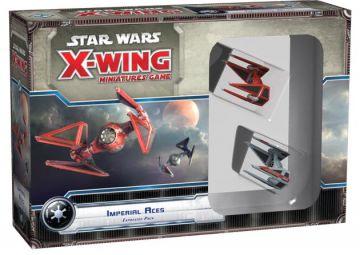 New As supplied by the Imperium

Fly your TIE with pride! Imperial Aces features two TIE interceptor miniatures with alternate paint schemes that allow you to wage your X-Wing dogfights while representing either or both of two of the Empire’s most recognizable TIE units: the 181st Imperial Fighter Wing and the Emperor’s Royal Guard. The expansion also introduces several highly skilled new pilots, a dozen upgrade cards, and all the tokens and maneuver dials you need to field these ships, as well as a new mission in which the Empire seeks to utilize new, experimental technology in a high-intensity clash with Rebel pilots.

This is not a complete game experience. A copy of the X-Wing Miniatures Game Core Set is required to play.