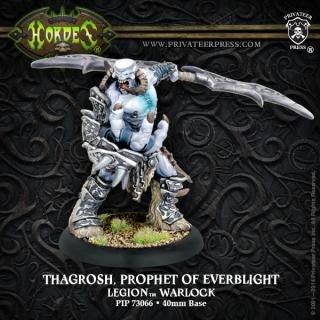 History will remember Thagrosh Hellborne as the abomination who unleashed the Legion of Everblight onto the world. But before he was the prophet of Everblight, he was an ogrun born of a harsh existence. After escaping slavery, he was compelled by fevered whispers and nightmarish visions to the sealed repository of the athanc of Everblight. In an unimaginable test of resolve, Thagrosh mutilated himself to accept the dragon’s blessing. He cut open his chest and tore apart his own ribcage to drive the athanc into his heart. Its dark power transformed his body into a blighted vessel for Everblight’s immortal presence.