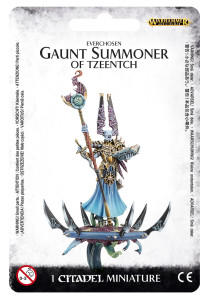 Originating from deep within the Realm of Chaos, the Gaunt Summoners are powerful daemon sorcerers of Tzeentch. Archaon exerts an iron grip upon their souls - they are not only favoured by the Everchosen for their abilities, which are prodigious, but for their helpless devotion to their masters’ twisted whims. Able to twist reality with their dread incantations and engulf whole armies in deadly warpfire, the Gaunt Summoners were responsible for some of the most horrifying atrocities committed during the Age of Chaos. Bearing to there gods scared number only nine of these bizarre faceless creatures exist at any one time, and it is an exceedingly rare event to see more than one appear at any time - it is a testament to their power that a single Gaunt Summoner can change the tide of battle completely.

This multi-part plastic kit contains all the parts necessary to construct one sinister Gaunt Summoner, riding a disc of Tzeentch. Wielding a Changestaff and a Warptongue Blade, this detailed model is borne aloft on a wave of magic, held fast to his Disc by eldritch tentacles and features a book and scroll from which his dread incantations originate. The Disc comes with six Blades. Eighteen components in total, with a Citadel 40mm Round base.