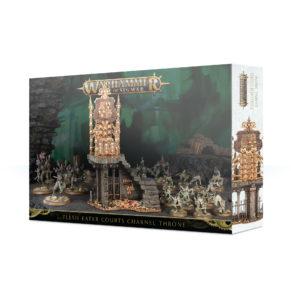 Formed from the bones of those killed by an abhorrant’s insane magic, a Charnel Throne exudes madness and necrotic energies. They are the seats of power for Archregents and Ghoul Kings, blazing beacons to mordants, and structures of abject horror for the enemies of the Flesh-eater Courts.

The Charnel Throne is a terrain feature available to all Flesh-eater Courts armies. Costing no matched play points, it’ll inspire your own units, increasing their bravery, while reducing that of nearby foes. Abhorrant Archregents, meanwhile, can use the power of the throne to summon even more units to the battlefield.