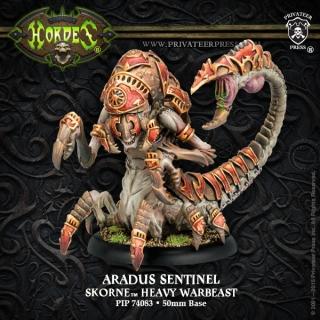 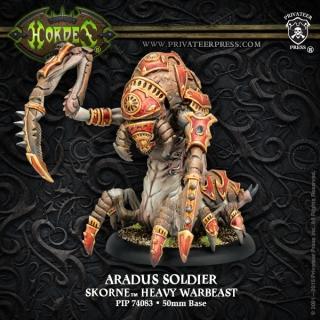 The horrific, insect-like aradus are among the most terrifying of the skorne’s warbeasts. Protected by a thick layer of chitin, aradus soldiers lash out in battle with hooked claws to drag enemies toward their vicious mandibles. The soldier grows strong from its feast, wounds closing with each mouthful. The aradus sentinel possesses venom sacs that can be constricted to fire a precise blast of debilitating venom at its enemies. Living tissue exposed to this toxin dissolves and sloughs off the bone in melted gobbets.

This box set contains two color stat cards and one multi-part heavy warbeast plastic model (PIP 74083). Included are all the components to assemble one of two heavy warbeast variants: Aradus Sentinel or Soldier. A player may field any number of these heavy warbeasts in a Skorne army.