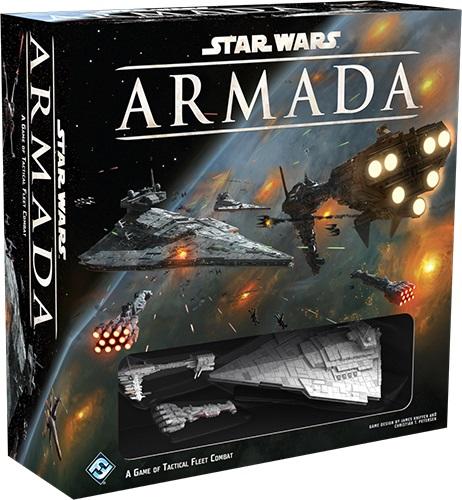 Rebel and Imperial fleets fight for the fate of the galaxy in Star Wars™: Armada, the two-player miniatures game of epic Star Wars space battles! Massive Star Destroyers fly to battle against Rebel corvettes and frigates. Banks of turbolasers unleash torrential volleys of fire against squadrons of X-wings and TIEs. Engineering teams race to route additional power to failing shields. Laser blasts and explosions flare across the battlefield. Even a single ship can change the tide of battle.

In Star Wars: Armada, you assume the role of fleet admiral, serving with either the Imperial Navy or Rebel Alliance. It’s your job to issue the tactical commands that will decide the course of battle and, perhaps, the fate of the galaxy.

However, battles between capital ships are fought on a massive scale all their own; the more powerful your ships, the harder it is to adjust their actions on the fly. Capital ships can’t easily vary their speeds or execute hairpin turns like the starfighters that buzz around them, so successful admirals must learn to master every aspect of the ships in their fleet and learn how best to implement their strategies well in advance of the initial engagement.

Each game is played over 6 rounds consisting of 4 phases per round, Command Phase, Ship Phase, Squadron Phase and the Status Phase.