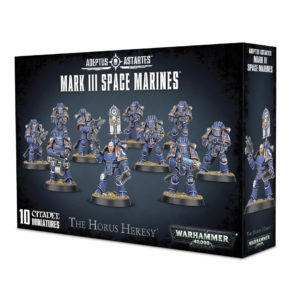 Clad in ancient suits of power armour, impressively powerful and daunting to behold, Mark III Space Marines are a living reminder of the dark days of the Horus Heresy. Their ‘Iron’ armour is a variation on the previous generation’s ‘Crusade’ pattern, with extra armour and reinforcements allowing them to absorb an unprecedented amount of enemy firepower. When encased in this armour, a Space Marine becomes an unstoppable juggernaut.

This multi-part plastic kit contains the parts necessary to assemble 10 Space Marines in Mark III ‘Iron’ power armour, ready to add to any Space Marine or Chaos Space Marine collection. They come with a host of armament options:

as well as 12 helmeted heads and 2 bare heads, with an included transverse helmet crest. This kit can be used as a standard Tactical Squad in games of Warhammer 40,000, and is supplied with 10 Citadel 32mm Round bases.