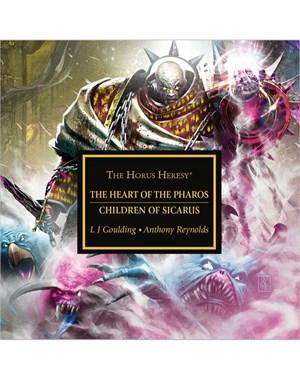 Horus Heresy: The Heart of the Pharos

THE STORIES
The Heart of the Pharos
The Pharos stands as a beacon of light in the darkness, a whisper of hope in the silent void, a bastion of defiance in the face of treachery. Without it there could be no Imperium Secundus why, then, do the masters of Ultramar know so little about its operation, or the dangers it could present? Young Oberdeii and Tebecai, Scouts of the 199th Company, descend into the depths beneath Mount Pharos in search of the truth... though it may haunt them for all time

Children of Sicarus
After the destruction of the Infidus Imperator, Kor Phaeron of the Word Bearers brought his followers to supposed safety in the Eye of Terror. However, their newly adopted home, the daemon world Sicarus, is far from the sanctuary they imagined the twisted hordes of the Kairic Adept Larazzar seek to crush these newcomers and all who would ally with them. Only in the ancient legends of Sicarus can their salvation be found, but is Kor Phaeron the one to lead them to it?