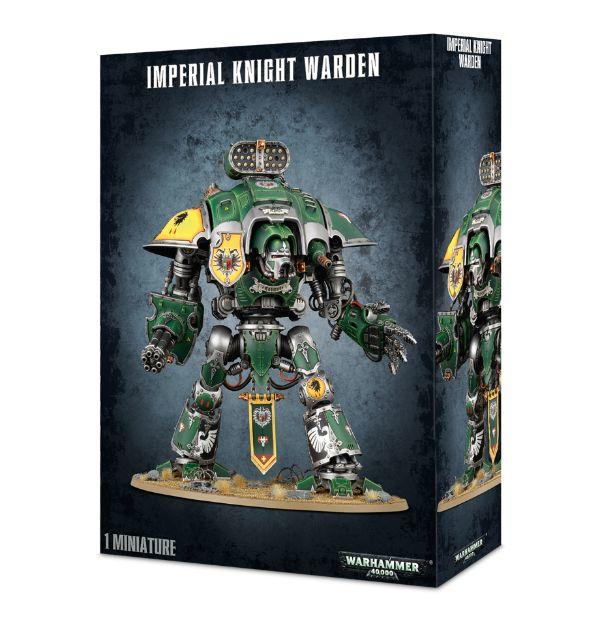 New, as supplied by Games Workshop.

An imposingly tall, heavily armed engine of war, nothing announces its presence on the battlefield quite like an Imperial Knight Warden. Carrying itself into the thick of the action with heavy, thudding steps, the distinctive drone of the avenger gatling cannon sounding a terrible clarion call, the Knight is capable of unleashing a furious hellstorm of large-calibre shells that can tear apart even the most impressively-armoured foe. Should any enemy be brave - or foolish - enough to engage a Warden at close quarters, theyll find themselves at the mercy of some of the Imperiums most fearsome close-combat weaponry; the Reaper chainsword is the stuff of hushed legend amongst the Emperors enemies.

This is a serious, serious bit of kit! Everything you need in order to build one Imperial Knight Warden is included in this box; one complete 147-component Imperial Knight kit and this seventy-four-component upgrade kit. It features three completely new faceplates, a new tilting plate/shield, a set of new Adeptus Mechanicus icons and a frankly insane amount of weaponry: a chest pintle Meltagun, a gatling cannon assembly (with heavy flamer), the infamous Reaper chainsword, a thunderstrike gauntlet, a thermal cannon and a rapid-fire battle cannon - on top of this there are carapace options including rocket pods, missile pods and an anti-air twin Icarus cannon.

This kit shares the impressive posing options with the standard Imperial Knight, with head, arm and waist joints, and can be built as a Knight Errant, Paladin, Warden, Gallant or Crusader - the weapons are all interchangeable and can be used with any other Imperial Knight models you might own.

In total, this multi-part plastic kit comes with 221 components and stands tall on a Citadel 170mm Oval Base.