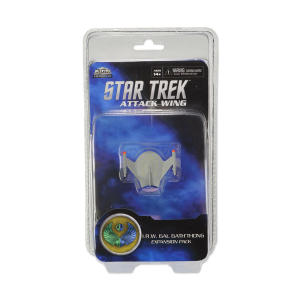 A Romulan Bird-of-Prey armed with plasma torpedoes and nuclear warheads. It is also equipped with an early version of the cloaking device, which allows it to move close to its intended target before firing its devastating torpedoes. After systematically destroying three Outposts in Federation space, the I.R.W. Gal Gath’thong crossed paths with the U.S.S. Enterprise. The Romulan commander proceeded to play a game of cat-and-mouse with Captain James T. Kirk and the two commanders matched wits in a battle to the death. The Romulan Commander’s last words to Kirk were: “You and I are of a kind. In a different reality, I could have called you friend.”