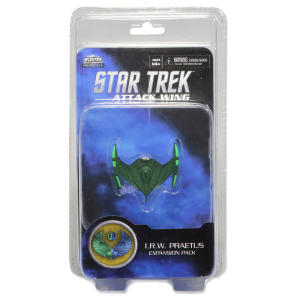 A 22nd century Romulan Bird-of-Prey that utilizes an early version of Romulan cloaking technology. The vessel has no shields and its ability to use its cloaking device involves several risks to the ship's main systems. Unlike other ships in Attack Wing, the Praetus can use a Cloak Action even though it has no Active Shields. However, this is risky and involves rolling a die to see if the ship is damaged. The Praetus is known to patrol cloaked minefields which present considerable danger to enemy ships flying through them, although this danger can be partially mitigated through an intensive scan of the area.