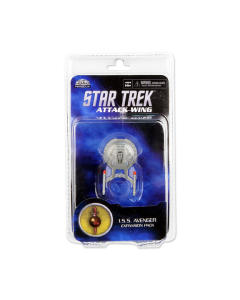 The I.S.S. Avenger is a Terran NX-class starship that narrowly escaped an attack by rebel forces with the help of the U.S.S. Defiant, a ship from the Prime Universe, led by Jonathon Archer. Admiral Black was aboard the Avenger during this attack and assumed command of the ship when its captain was killed in the battle. Among its crew is the Vulcan slave, Soval.