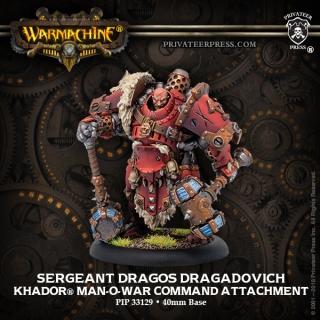 In another life, Dragos Dragadovich may have been one of the foremost manhunters to emerge from the forests of Skirov or a barbarian warlord with thousands of warriors sworn to him. Born in a modest trapping village, his youth was spent defending his family’s homestead from wild beasts. Dragos had never even seen a city until his conscription, at which point his size and ferocity let him easily qualify as a Man-O-War. Unlike others of his rank, Dragos does not command a dedicated unit. Instead, he is given special assignments, traveling between kommands as the war effort demands.