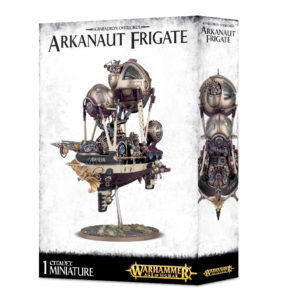 The Arkanaut Frigate represents centuries of refinement by the shipwrights of the Endrineers Guild. In its design, a balance was struck between speed, transport capacity and firepower to create a versatile craft that could serve as the mainstay for the airfleets. With its sleek hull and powerful buoyancy endrin, the Arkanaut Frigate is fast and powerful enough to escape the gravitational drag of a density hole, while retaining enough firepower to level a city should the need arise.

This multi-part plastic kit contains the components necessary to assemble an Arkanaut Frigate. Smaller than an Ironclad, larger than a Gunhauler, it dominates the skies by means of its dirigible and is covered in weaponry a heavy skycannon or skyhook as a front-facing main weapon, with aethershot carbines, grudgesettler bombs, skymines and detonation drills attached to the hull, with belaying valves for ramming-speed assaults.

A huge ancestor figurehead glares balefully from the prow, and the duardin crew is appropriately detailed a captain stands before the instruments and wheel, a navigator perches in the crows nest, sextant aloft and an endrinrigger wields an oil can and hammer, fervently replacing rivets and lubricating components to keep the Frigate skyward. Most of these details can be modelled on the frigate in different ways; theres plenty of space on the side of the hull to name the ship. Paint it on in duardin runes for authenticity!

This kit comes as 88 components and includes a Citadel 120mm Oval base, with ??a 50mm ball and socket flying stem.