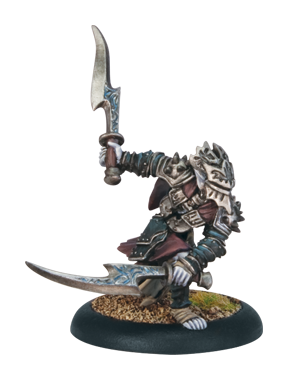 Bayal, called the Hound of Everblight, is first among hex hunters. He is an incredibly potent battle wizard who can unleash withering bolts of blighted energy upon foes or freeze their bones with blasts of icy power. When leading his men in battle, Bayal becomes a whirling dervish of destruction, eviscerating his victims with twin hex blades or channeling his blighted magic through the weapons to bind a foe in shadow.