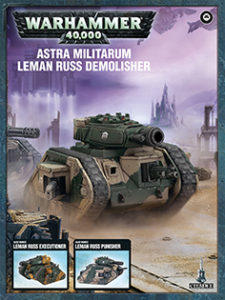 This box set contains one multi-part plastic Leman Russ Demolisher, and all of the components to allow you to assemble either a Punisher or Executioner variant instead. This 98-piece kit includes all of the sponson and hull-mounted weapon options available to Leman Russ tank variants, including: a lascannon, heavy bolters, heavy flamers, multi-meltas, and plasma cannons. Also included are a Tank Commander, smoke launchers, and a sheet of water slide transfers.