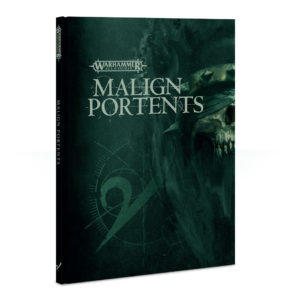 It began with unsettling dreams, and unnatural lights in the sky. Tempers frayed, families fractured and rulers became irate as their subjects fell to distraction and gossip. There was something in the air, they said; some malediction that threatened to turn the disquiet into dread. Waking nightmares spread across every land, promising a deathly face or the terror of oblivion. Traders and explorers carried ominous accounts through Realmgates only to find those on the other side bore disturbing stories of their own. This period became known as the Time of Tribulation, and it was well-named.

Malign Portents is an 80-page hardback book containing background and rules which catapult the mortal realms into a time of grim uncertainty, as Nagash begins an aeons-long grand plan to assert his power over the dead, spreading the necrotic influence of Shyish over every realm. Of course, the visions of disaster this plan is causing have not gone unnoticed – Khorne, Nurgle, Tzeentch, Slaanesh, the Horned Rat and Sigmar himself are affected by these portents, and every faction in the mortal realms is moving against the undead hordes of Nagash.

- A brief history of the Age of Sigmar, from the apocalyptic death of the world-that-was to Sigmar’s discovery of the mortal realms, his reign of peace, the ascendance of Chaos that tore his empires down and the glorious vengeance of Azyr during the Realmgate Wars;
- The visions and phenomena that plague the realms, as scryers and wizards across the realms see visions of a grim future – the dead reanimated and marching to total war, expanding the influence of Shyish to grim ends;
- Introduction of the Warscryer Citadels – potent sources of celestial magic hurled down by Sigmar himself that, when mastered, grant the power of prophecy;
- Introductions to the 4 champions introduced with Malign Portents, 1 for each Grand Alliance – the Lord-Ordinator, the Darkoath Warqueen, the Knight of Shrouds and the Fungoid Cave-Shaman;
- The history of the realm of Shyish, also known as the realm of Death, an overview of Nagash’s grand plan, and an insight into the disastrous consequences should this plan go unopposed;
- The Doomed March: Nagash’s plan has come to the attention of many, and whole armies have been mobilised to invade Shyish – this is the story of just how badly that has gone so far;
- A timeline of key battles and events leading up to the time depicted in Malign Portents;
- A miniatures showcase featuring armies, depictions of key battles, and examples of fantastically painted miniatures by the ‘Eavy Metal painting team

- The Time of Tribulations: a selection of optional rules for Open, Narrative and Matched Play games of Warhammer Age of Sigmar, which allow you to recreate the battles of this inauspicious time, including:
- Realm of Battle: Shyish, the Realm of Death: rules which help you set your battles in this deathly realm, including Realmscape rules, the new spell Pall of Doom, new Command Abilities and The Power of Death – effects which come into play whenever a unit is slain in the realm of Shyish;
- The Malign Portents: these are 6 dark omens caused by the cataclysmic nature of Nagash’s grand undertaking that befall heroes in Warhammer Age of Sigmar, each omen itself consisting of 6 effects that can aid them by using Prophecy Points in their battles – with bonuses for using Harbingers, the 4 new characters introduced in the book;
- Skirmish Battles: rules for fighting Skirmishes in Shyish, including the use of Malign Portents, Command Abilities, Artefacts of Power, Mysterious Terrain and Rewards of Battle (including Magic of Shyish, 3 extra spells for Wizards), along with a Battleplan featuring objectives, setup instructions and victory conditions;
- 3 Narrative Battleplans, each featuring objectives, setup instructions, victory conditions and special rules;
- 2 Pitched Battles, each featuring set-up instructions, use of Triumphs, rules for generating prophecy points, victory conditions and additional rules if both players bring a Harbinger as part of their armies;
- 4 Warscrolls, 1 each for the 4 new characters – the Lord-Ordinator, the Darkoath Warqueen, the Knight of Shrouds and the Fungoid Cave-Shaman – along with their special rules for interpreting the Malign Portents and directing the will of the gods into their battles;
- A Warscroll of the Warscryer Citadel, a scenery piece which allows those who hold it to glimpse the future; - Pitched battle profiles for the 4 Harbingers.