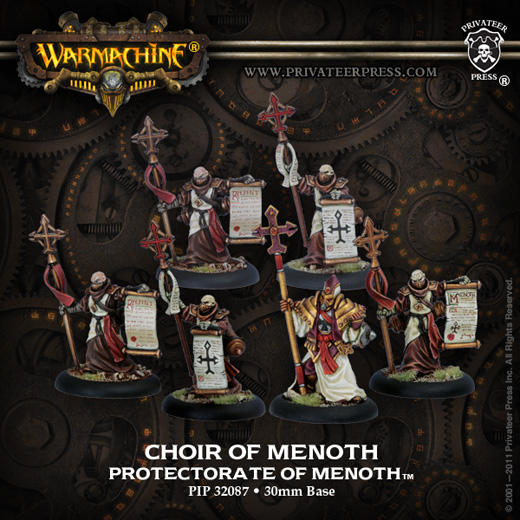 Needs Generating RRP: £20.95
New as supplied by Privateer PressThe choir of Menoth are devout warpriests who accompany Protectorate
warjacks into battle, calling down the blessings of the Creator upon
these mighty engines of destruction. The choir???s prayers can turn aside
incoming projectiles, unravel enemy spells before they reach their
targets, and divinely guide warjack weapons to smite unbelievers.
The Choir of Menoth unit comes in a box (PIP 32087). A player may
field up to three Choirs of Menoth for each warcaster in a Protectorate
of Menoth army.
SPECIAL NOTE:
PIP 32087 contains the same Mk II stat card as PIP 32005. The models in
PIP 32087 are the same models as are in PIP 32005 and PIP 32006 and
replace those older PIPs by offering their contents in a complete unit.
PIP 32005 and PIP 32006 will no longer be available from Privateer
Press beginning May 1, 2011.