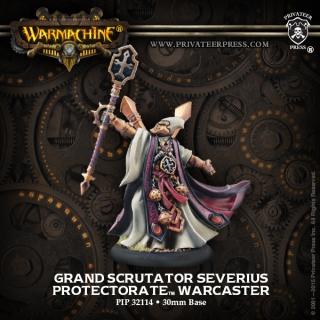 Severius lives to battle the enemies of his faith. He brings a commanding presence and undeniable genius to the battlefield, and his warjacks come alive with the same fervor as his converts. While age may have withered the warcaster and stolen his former strength, what he lacks in bodily prowess he makes up for with divine power. When he speaks the Litany of Menoth in battle, he can instantly silence the blasphemous sorceries of his enemies.

SPECIAL NOTE: PIP 32114 contains the same stat cards as PIP 32001. The replaced PIP will no longer be available from Privateer Press beginning April 1, 2016.