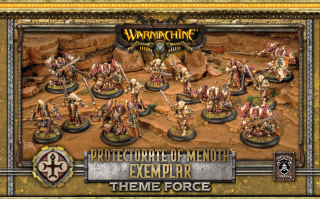 The Exemplar Knights make up a martial order of pious warriors who crusade in the name of Menoth, the Creator of Man. They are a blazing sword wielded by the clergy of the Menite faith. The Exemplar order makes up the backbone of the Protectorate of Menoth’s military might. Once called upon to uphold doctrinal purity and to root out potential heretics and traitors, they now march to war beyond the borders of their nation. When Exemplar go to war against the enemies of the faith, they do so invested with consecrated weapons and armor, guided by utter obedience to the will of the scrutator priests. Their faith is unshakeable, their minds unclouded by doubt or fear, and their advance unstoppable.

Take command of these zealous knights with this box, which contains a full complement of Exemplar ready to support your warcaster’s battlegroup. Fight in the Creator’s Name!

Combine this box with the Protectorate of Menoth battlegroup box to build a complete 35-point army!