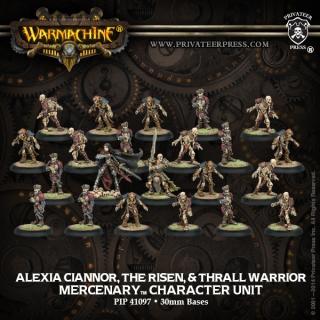 Obsessed with finding a way to bring her murdered mother back from the dead, Alexia Ciannor has turned to the life of a mercenary to increase her knowledge of death magic. By wielding the vile and legendary sword the Witchfire, she raises and controls the dead with startling ease, but the relic’s dark whispers bring Alexia to the brink of madness.

SPECIAL NOTE: PIP 41097 contains the same Mk II stat card as PIP 41028. The models in this box represent the same figures in the game. PIP 41097 replaces PIP 41028 and PIP 41029 by offering the full allotment of Risen Grunts and one Thrall Warrior Solo in one box. Additional Thrall Warrior Solos (PIP 41030) are available separately. The replaced PIPs will no longer be available from Privateer Press beginning August 1, 2014.