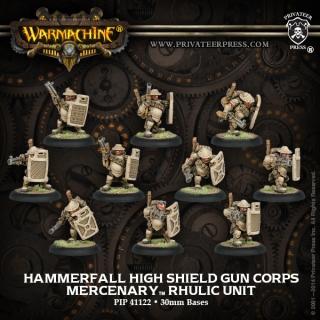 A crack gun corps from the Rhulic fortress of Hammerfall, this armored phalanx steadily marches forward unleashing volleys of lethal shot. Working in unison, the Hammerfall High Shields form an impenetrable shell that brushes aside enemy fire as they bring their double-barreled war rifles to bear. The deadly rifles jut out along the notched wall of shielded dwarves to blast away at their unfortunate targets.

SPECIAL NOTE: PIP 41122 contains the same Mk II stat card as PIP 41023. The models in this box represent the same figures in the game. PIP 41122 replaces PIP 41023 and PIP 41024 by offering their contents in a complete unit. The replaced PIPs will no longer be available from Privateer Press beginning March 1, 2014.