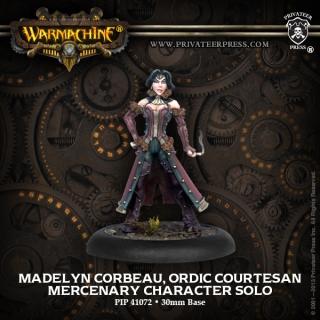 The court of King Baird Cathor II of Ord is known for its subtle intrigues and stunning courtesans. Madelyn Corbeau may not have been the most beautiful woman to grace the Bandit King's court, but she is certainly the most brilliant intriguer to enter his service.

Having charmed half the courtiers in western Immoren, it is simple enough for her to gain access to the commanders of armies. She sells her services as an adviser to any army with coin. No matter which army she accompanies, her loyalties remain firmly with the Baird, and she passes her intelligence on to the King's spies whenever possible.

Madelyn may be the most formidable asset in the Bandit King's struggle to keep his nation independent of his hungry neighbors.