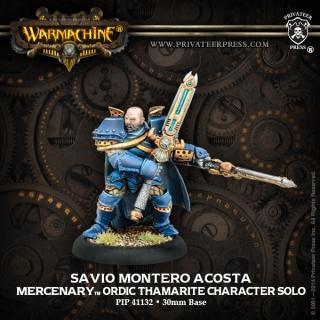 The Ordsman Savio Montero Acosta is determined to test himself against the finest melee combatants the Iron Kingdoms has to offer in his relentless pursuit of martial transcendence. As an unabashed Thamarite and a master swordsman, Acosta regards perfecting his own abilities to be the highest calling. Armed with twin storm glaives, a legacy of his time fighting alongside Cygnar’s Malcontents, this duelist faces down the mightiest of foes. Few combatants can hope to match his prowess—and those are precisely the opponents he seeks most fervently.