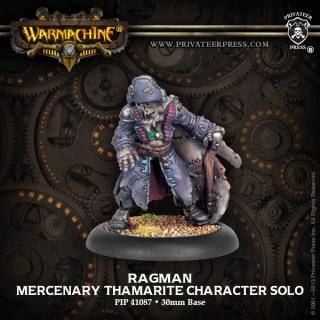 Once a Llaelese noble turned to the vile arts of necromancy, the Thamarite called the Ragman has been drawn to the battlefields of western Immoren by the palpable odor of death. As he picks among the dead for his unnatural purposes, his profane magic lets him kill with a glance and animate his victims to serve him.