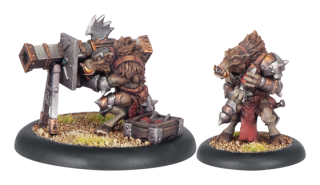 The farrow have recently made vast improvements in their military arms and have managed to construct a number of powerful weapons based on similar designs employed by other fighting forces. The razorback, a crude but effective rocket launcher, is one of the most potent of these weapons, and its explosive introduction onto the battlefields of western Immoren has resulted in more than a few shocking victories for the farrow.