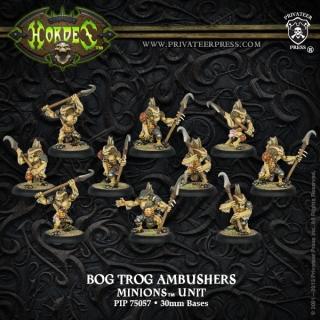 The fiercely territorial and primitive amphibians known as bog trogs thrive in swampy regions considered undesirable by humans and other more civilized species. Bog trogs are peerless masters of ambush, swimming silently and unseen just below the surface of a stream, river, or shallow pond before springing to attack.

SPECIAL NOTE: PIP 75057 contains the same Mk II stat card as PIP 75006. The models in this box represent the same figures in the game. PIP 75057 replaces PIP 75006 and PIP 75007 by offering their contents in a complete unit. The replaced PIPs will no longer be available from Privateer Press beginning February 1, 2014