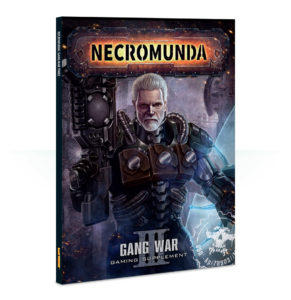 Note: a copy of the Necromunda: Underhive boxed game is required to use this supplement.

The rules included with the Necromunda: Underhive boxed game cover battles between Houses Escher and Goliath – these are not the only Houses vying for supremacy of the underhives. Necromunda: Gang War 3 introduces House Van Saar; the technological powerhouse of Necromunda, creators of the finest weapons and armour of all Houses, whose power is built around a dark secret. Along with this, the book introduces Brutes – a new type of hanger-on – and rules for expanding the role of the Arbitrator in your games of Turf War.

Contained in the 90-page softback:

- Gangs of House Van Saar: This section contains the story of House Van Saar – their love of all things technological, their incredible artisanal skill and the secret which is rapidly killing them from within – along with a detailed breakdown of their place in the hierarchy of Necromunda, and the methods by which they exact violence upon their rivals. It also contains full rules for founding a House Van Saar gang, with gang composition and an exhaustive equipment list;
- Expanded House equipment lists, including a wide range of equipment available to Houses Orlock, Escher and Goliath;
- Brutes: add extra muscle to your gang with this new type of hanger-on, including profiles and rules for the following characters: Luther Pattern Excavation Automata and ‘Kratos’’ H-Grade Servitor Ogryn;
- The Trading Post: post-battle, gang leaders come here to barter and trade for weapons and equipment from a wide array of traders and caravans – this is a huge list of wargear, weapons, armour and status items, each with listed prices and rarity;
- Status Items: 3 new types of wargear available to the leadership of any gang, purchasable as normal from the Trading Post;
- Arbitrated Campaigns: building upon the rules presented in Gang War 1, this section expands the role of the Arbitrator, presents different kinds of campaign and introduces a host of new events and scenarios. This section includes guidance on the role of an Arbitrator, along with a collection of campaign ideas which alter the guidelines set out in the Turf War campaign system.;
- Rules for multiplayer games, with 2 specific scenarios;
- Rules and background for the following Hired Guns: Grub Targeson (AKA Grumpy Knox), Mad Dog Mono – Hive Scum, Belladonna – Noble Bounty Huntress;
- Scenery of the Underhive: a showcase of a specially built diorama that provides a glimpse into the rusting depths of a Necromundan Hive, using Citadel scenery kits to create a vast vertical environment brimming with dark shadows, sinister machines and potential flashpoints.